About Moses – Panorama of his Life. From birth to death

1. THE BIRTH OF MOSES

Baby Moses rescued from the Nile

The history of Moses divides into three periods of 40 years. Moses in Hebrew would be mashah(Heb:מָשָׁה) meaning “drawn” and in the Coptic meaning “saved by the waters”. He was born at Goshen, In Egypt, B.C. 1571. The story of his birth is thoroughly Egyptian in its scene. His father Amram, son of Kehath the Levite, who entered Egypt with Jacob’s household. His mother Jochebed, who was a relative of Kehath. He also had one older sister Miriam and one older brother Aaron. His mother made extraordinary efforts for his well being from the general destruction of the male children of Israel commanded by the Pharaoh during the time when he was born. His mother placed him in an ark and concealed it, sent it in the bulrushes of the Nile river, where later he was discovered by the Pharaoh’s daughter, who was a childless wife. She adopted him and raised him as her own.

2. MOSES DELIVERS THE ISRAELITES OUT OF EGYPT

One day after he became an adult he had killed an Egyptian who was beating a Hebrew. He fled to Midian to escape the Pharaoh’s death penalty. During the time when he was wandering as a fugitive. Moses, who up to this time was an Egyptian, now became for a time an Arabian. He married Zipporah, daughter of his host, to whom he also became the slave and shepherd. There, on Mount Horeb God reveals to Moses His name Jehovah (Yaweh) and communes with Him for forty years. Then, God commands him to go back to Egypt to bring the Israelites out of slavery and into the promised land. He returned to carry out God’s command but the Pharaoh did not listen, because of his disobedience God gave the Ten Plagues and finally the Pharaoh relents. He leads the Israelites to the border of Egypt, but there the Pharaoh’s heart became hard once more. Then, he was commanded to raise his staff and the sea divided into half. The Israelites crossed the sea and Pharaoh’s army was destroyed by the sea. Eventually, the Red Sea Crossing was the sign that God gave through him to show His divine power to Israel and the nations.

3. MOSES AND THE TEN COMMANDMENTS

After crossing the sea, Moses led the Israelites to Mount Sinai, where he was given the Ten Commandments from God, written on stone tablets. However, since he remained a long time on the mountain, some people started to fear that he might be dead, so they made a statue of a golden calf and worshiped it. When he came down, he had seen what they were doing and due to their disobedience, this angered God and him. Moses, out of anger, broke the tablets and eliminated those who were worshiping the golden calf as well. Later, he went up the mountain again to receive a new set of tablets with the ten commandments written on it. He continued his life there obeying the Law God has given. In his final years from Mount Sinai, God gave him instructions to build the Tabernacle, the mobile shrine by which he would travel with Israel to the Promised Land. 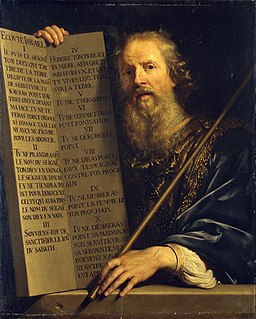 From Mount Sinai, Moses and the Israelites headed towards the Desert of Paran on the border of Canaan. From there he sent 12 spies to inspect the land. As the spies returned they warned the people that its inhabitants were giants. People started to fear and wanted to return to Egypt, some even rebelled against him and against God. He told the Israelites that they were not worthy to inherit the land, and wander around for forty years until their generation all had died and their children would inherit the land.
When the forty years had passed, he led the Israelites east around the Dead Sea to the territories of Edom and Moab. There they escaped temptation of idolatry and received God’s blessing through Balaam the prophet, and slaughtered the Midianites, who by the end of the Exodus journey became the enemies if Israelites. He was given notice twice that he would die before entering the promise land. Once at a view point of the promise land on Mount Abarim, and once at the battle with the Midianites he had won. Also followed by the incident of the Bronze Snake(Nehushtan).

On the banks of the Jordan River, in sight of the land, Moses passed his authority to Joshua and Caleb. The only ones whom have entered the Land of Promise. He then went up Mount Nebo to the top of Pisgah, looked over the promise land of Israel spread out before him, and died. He died at the age of one hundred and twenty.

The life of Moses and Exodus

Moses. What does this name remind you of? Yes, many will think of ‘miracles’. The name Moses means ‘drawn from water.’ Actually he parted the Red Sea [water] so that the Israelites could escape Egypt. Moses Read more…

Moses and the World Mission Society Church of God

World Mission Society Church of God established according to Moses’ prophecy What comes across your mind about Moses? A prophet of Israel? The miracle of the Red Sea? Canaan, the land of promise? Or the Read more…

The Connection Between Moses and Jesus